what we do on the weekends.

when they let matt out of his cage for a while, we explore the city. 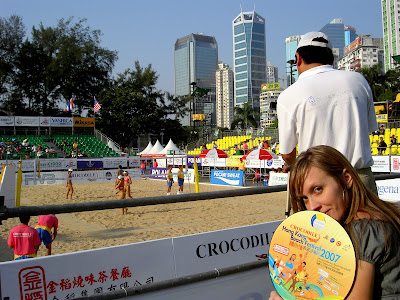 we found an international women's professional volleyball competition. matt is an avid beach volley player, and i can aim a pretty good bump three times outta five, so we thought this would be a mutually enjoyable saturday activity. there was definitely a little home court advantage going on... china had at least 4 women's pairs competing, and they were all stellar athletes. i was shocked to see such tall chinese women, but i guess when you're working with a population of 1.3 bil, you've gotta have a freakishly tall girl buried in there somewhere. 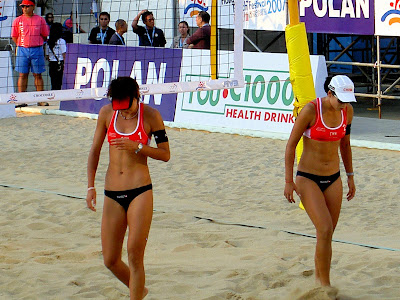 remember these chinese brutes for beijing 08 (i think the one on the left's last name was wang)... years of communistic athletic training has served them extremely well. they were the team to beat, and i dare say they have kerri walsh and misty may's number. makes me wanna jump on a treadmill, ya? 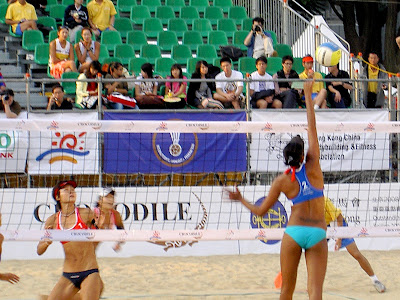 go team philippines! they were really probably a couple of USC coeds born in southern cal to immigrant filipino parents, but we cheered for them anyway. basically we cheered for any team going up against the chinese.

and when in rome... we went to a karaoke bar. well, it was more like a karaoke hotel. each party had their own private room with snacks, video games, and of course, karaoke. 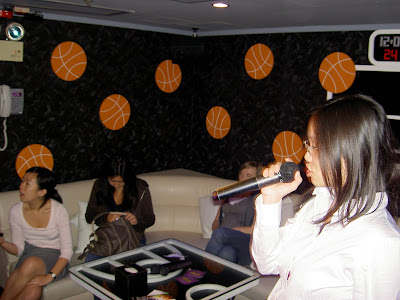 this stuff is serious business... matt's co-workers had definitely done this before and were actually really good. 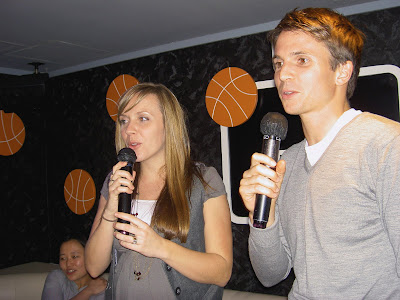 butchering a carpenter's classic, "close to you." 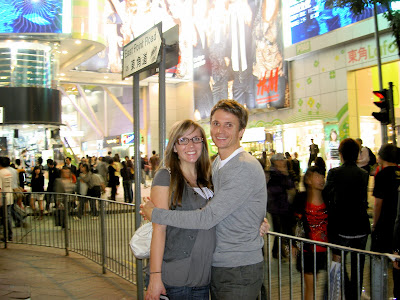 and, a little love.

look how cute you are! your belly! and are those your glasses for real? have you always had 'em?

oh i am so jealous about the volleyball! caleb has turned me into a real afficionado. and you look darling.

looks like you guys had a fun turkey weekend. i heart the carpenters, way to be brave. you guys look great, you are such a stylin preggo!

ps. i also sang a carpenter's song while trying out a little chinese karaoke. scary, but i'm sure y'all did better than i did.

i already left a comment but it never showed up... stupid blogger errors! wouldn't wanna run into one of those chinese volleyball players in a dark alley, they're ripped! looks like you had fun, sister. i wish i could've come with mom, miss you!

oh and when did you get the glasses? you look so fetch.

I got those jeans in Italy. They totally don't fit anymore. I have to leave them un-button'd and I use a belt. That was the last time I am going to wear them for awhile. They are officially too small! You look so good! Your belly bump is barely showing!!

you look great. thinking about you and your soon to be. let me know what the plans are on the where abouts of the birth. -g

You guys are so cute!