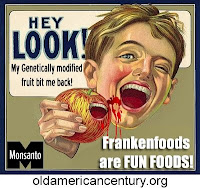 heard the latest? the food and drug administration is claiming that it is perfectly safe to eat the meat of cloned animals. this biogenetically engineered animal flesh won't be entering the marketplace just yet, but the meat of the offspring of cloned animals is headed to a grocery store near you. and the powers that be are trying to keep the cloned meat from being labeled as such, so you, the consumer, won't know the difference between a regular old cow and franken-beef.
are red flags going off in anybody else's head here? i don't think cloned meat has been around long enough to really know if it's a healthy thing or not; i'm still questioning if the actual act of cloning animals is even ethical, and now we've got the green light to grill up the test-tube meat, slap it between two buns and serve it to the folks at the neighborhood barbecue? do y'all remember dolly? that poor dumb sheep, the first animal ever cloned? they had to put her down way before her prime because she became ill with some lung disease which raised questions about the aging process of cloned animals. hungry yet? although cloned sheep haven't made the final cut (yet) for human consumption, cows, pigs and goats all have the US government's big fat thumbs up.
maybe i'm just a little paranoid because the other day i watched that show "i am legend," and i don't wanna give away the plot here, but i'm a little sensitive about playing god. i'm certain that if we start engineering our meat to be more tender and flavorful instead of letting nature take it's course, it will totally backfire on the human race and we'll turn into rabid, cannibalistic zombies running from will smith and his semi-automatic weapons.
kinda brings a whole new meaning to the double cheeseburger, don't ya think?
*interesting yet unrelated side note: yesterday here in hong kong i paid $50 for one pound of organic ground beef. FIFTY GREENBACKS. i'm anemic, but i don't know if i'm 50-dollars-worth anemic.

you poor thing! that is a lot of moola to part with!
every time i cook meat of any kind i really question the whole process. i feel funny about the unclones stuff -i am super sensitive about my food and what i put into my kids mouths. i get really ocd reading labels and such. like when i found out about the transfat in eggos, i almost has to sign my kids up for counseling. we lived on those for years......the joys of parenting!

Okay, so I freaked out yesterday at Wal*Mart when I realized that one pound of lean ground beef cost me $3.68...now I'm feeling ashamed and grateful at the same time! Thanks for humbling me Erin. :)

This is why we eat elk!!

oh to have just a skosh of your wit skeener. i couldn't agree more and had many of your similar thoughts/concerns about eating meat from cloned lifestock. do we really have enough research behind us to know that it's not gonna kill us off in 10-15? i never had much of a desire to be a vegetarian but this might now i might be forced to consider it.

Hey Erin, I happend upon your blog while randomly lurking. I am frinds with Rachael Welde and you used to hang out with us at Denny's in the Weber State days. Anyway, loved your blog. Highly entertaining.
Amy Drake

i'm gettin kinda grossed out. meat is wierd enough as it is. and to think they could sneak freak meat in without me even knowing it. but hey, if it happens to clone itself after getting packaged at least it will be cheaper per pound!

Put me down for a salad, and hold the meat.

ummmm..... makes you want to raise your own beef, eh? that or start taking a bunch of supplements and get your protein elsewhere.. eeek.