shoot, never a better time to take your kid on a vacation than four weeks after his birth, right? fox was actually quite the champion on our trip to the chinese island province of hainan. before we left i was a bit skeptical about hainan, the chineezy hawaii, convinced that nothing in china could ever come close to the beautiful beaches of hawaii; however, hainan had clean, breathable air, and that was enough to get me on the plane. 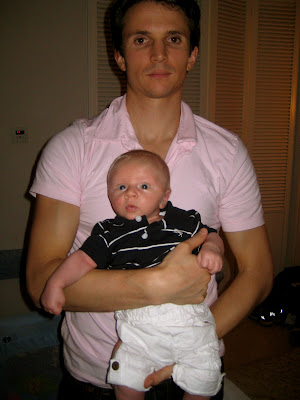 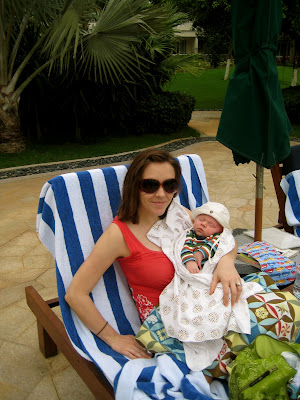 gilligan and mary ann.
it was surprisingly nice. we didn't leave the resort, just to keep things logistically simple. we lounged around, read, ate, and taught our newborn the finer points of doing nothing by the poolside. matt insisted i get a massage, something i've never done at a hotel before and hope to do again.
the only real drama we encountered was trying to get off that rock. first, our cab ride to the airport was one of those cultural experiences you don't need to have ever again. matt and i were convinced the cab was about to lose one or more of its tires everytime we hauled around a corner. and driving on hainan was an adventure in itself -- getting cut-off, slamming on the breaks, leaning on the horn, running red lights, speeding -- felt like i was back in dallas. secondly, our flight was overbooked and we were the lucky ones shafted with being forced to find a different way home -- they didn't give us a choice. so, one flight, two border crossings and a couple of bus rides later, we got back safely and soundly. fox slept the whole time. good boy.

oh, i dreamt that i was in kailua last night... i was depressed when i woke up. i seriously think about hawaii all the time, sigh. your cab dealio sounds a bit like my ensemble in l.a. can't believe little fox slept the whole time, that's impressive! and i'm glad you eventually got back safe and glad you got a massage, sister. we should do that with the girls sometime, maybe.

oh and i think fox looks alot like you in the first picture:)

IMPRESSIVE! A trip already, and he is only 4 weeks old. Glad he was a good sport, he has got to get use to traveling, he is a Burton.

I'm jealous. I want someone to take me on vacation, carry me around everywhere...

Wow, looks nice! That's cool that you got to get some r&r--and looks like he didn't mind a bit! What a trooper :)

what a champ that fox is. i see my hooter hider by you. that warms my heart.

Erin!! four weeks and already in a swimsuit.. I can only hope:) You look great and Fox is as dashing as ever.

erin you look fabulous! seriously! so does fox and matt! i am glad you went! you need to come to UTAH. glad you survived.

We absolutely love it! It takes the clearest pics and has so many functions. PLUS it came with a extra Lens and a sweet High Resolution Epson Printer. We got the package at Circuit City for $649 an amazing deal. So i recommend this camera to every one!!!!! We are excited for you to come home so we can hang out!!!!!!

aww. he's so stinking cute! i can't wait to meet him in person. i'm so glad you had some time to relax and get a massage. what a great hubby! and what a great little bambino!

What a fun, relaxing trip (the trip home sounds exciting). You guys look great! Fox is so cute, what a stud!

slept the whole time...atta boy, fox! taking after your auntie manda...sleep is good!

You look fetch. I'm glad you had a good vaycay and made it home safe and sound. Are you at all sad to be returning to the motherland?

it looks beautiful. i'm glad you were able to get away on a vacay. i second the bathing suit comment, kudos! i wouldn't be caught dead in one for months!!

let us know when you're back in the states in one piece. :)

You look so beautiful Erin! Way to bounce back into things. Glad to hear you got a nice getaway. Fox is dashing by the way.