it was a long, exhausting, covered-in-poop,-sweat,-and-breastmilk 30 hours back to the land of the free and the home of the brave, the country to which fox belongs but has never seen. my happy little tank boy got plenty of stares and drew lots of questions, and people had even more questions when we told them he was born in hk. a common question posed is if he has dual citizenship, and nay, the chinese don't hand that out quite so easily. too bad... a chinese passport might come in handy if fox ever wants to enter iran, but as one hippie woman we met in the airport responded, "well, maybe it just doesn't matter. maybe someday, we'll all be one." then we held hands and sang kumbaya. 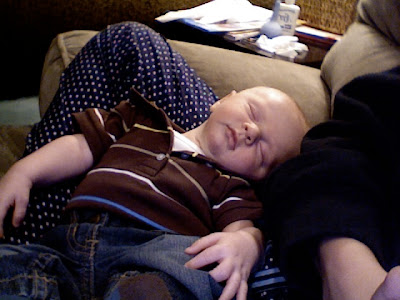 thus far our time in the good ole U.S. of A. hasn't been as dreamy as we'd imagined. fox and i both have colds, and i'm not sure if the poor lad will ever figure out his days and nights. we're just in a medicated, stuffy fuzz. and we miss matt terribly. and humidity. and our hk friends. but god bless america, clean air and normal skim milk.

i hope you both get feeling better soon! atleast you're among family to help you out. fox probably doesn't have a clue what the heck is going on. hope he isn't snorting to get a breath anymore! poor little guy, that made me so sad! hang in there, maybe i can bring good weather with me when i come next weekend:)

hong kong misses you too...and the humidity is sticking around here just to make you feel better about being where you are! enjoy the utah weather. joseph and i had the dual citizenship question arise as well...good to know how that works. josh, though, informed us as we were talking about it, that fox was 'for sure chinese' since he was born in hk. so...fox will always be chinese to us;)

welcome back, friend! glad to hear you got back safely. sorry you're under the weather, that's no fun.

once you get feeling better we want to do that baby shower! yes yes we do. (we can even sing Kumbayha if that makes you feel more comfortable... :)

Erin.. are you in UTah or Dallas! We should meet up! I live practically a hop, skip and a jump away from your parents!! Glad you're back.. sorry about the colds, I think I've had at least 50 different strands this winter:(

america is glad to have you back. it was so good seeing you yesterday. can't wait 'til our next date. ready when you are.

I am glad you are all back to the united states of america!!!

Hey Erin! - glad you made it home. I can't wait to see your little Fox - he's so cute in pictures! OK - so get back to Texas as fast as you can, the bluebonnets are waiting :)

I miss ya and I need to meet the wee one

I can't believe that you flew to the USA with a tiny tot...& by yourself! I'd be scared to fly that long by myself....let alone with a 2 month old. You amaze me. I'm glad you're home safe & I hope Matt gets back soon! Hope you 2 get feeling better.

Are you here to stay or just a visit? Must have been a fun flight with a baby and all alone to top it off.

Welcome back!! That is a LONG trip back. We need to get together sometime. I can't wait to meet your little one. I hope you start feeling better soon.

What a trip! Glad you are back even though I still don't see you. The milk, man that is a huge plus, skim drinkin' milk. Nice. Have a glass on me!

Welcome home! I can't imagine how long that trip must have felt. Poor little Fox, but more so poor you! We are so excited to see you guys. I'm sure you guys are way busy. There is a lot of lost time to make up for.

20 hours! Wow. I will quit complaining about the 5 hour stint coming up. Of course I have two...just kidding. You deserve serious props. How long are you in town? I won't be out until after Memorial Day Weekend. Maybe someday we can get our wee ones together.