to greta and rosie: how did you ever leave? after having lived in nyc, anything else has got to be a serious let down. granted, it's probably much different living there rather than visiting for a weekend, but still. just curious.
that said, we had a fabulous weekend. a pretty high bar was set for subsequent mother's days. i love you matt and fox; good luck with next year. we stayed on the 51st floor at the W hotel in time's square and hobnobbed with some pretty serious stars, like this guy:

georg listing, bassist for the biggest rock act to ever come out of deutschland, "tokio hotel." there's your random trivia for the day, and don't ask me how i know this cos it's embarrassing and i'll never tell. what a dreamboat though, eh ladies? yep, all 5' 2" of him. he shared an elevator ride with us, and i eavesdropped on his conversation with what little german skills i still possess. and that was our brush with fame for the weekend. i feel hugely satisfied. 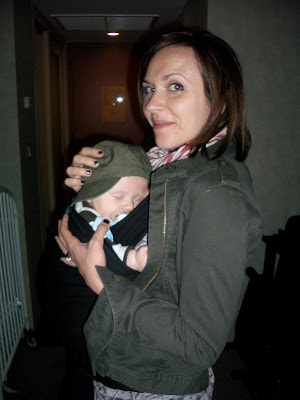 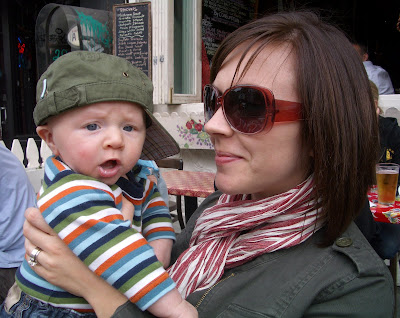 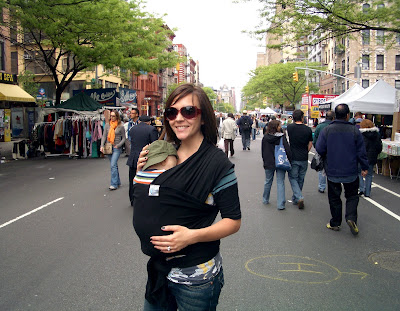 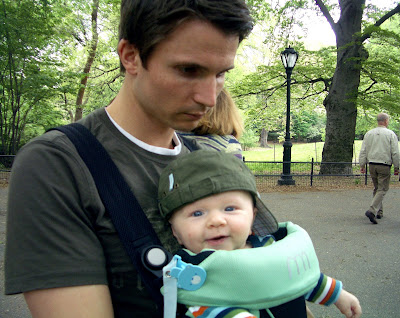 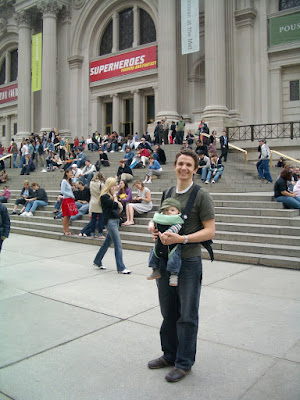 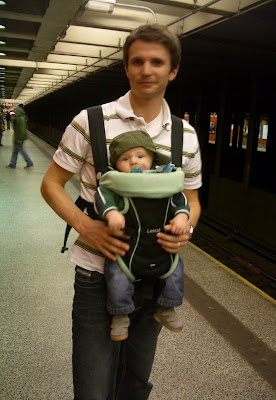 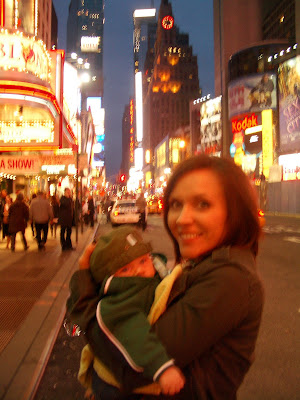 fox is a good sport.
besides georg, we saw some artwork at the met, wandered through central park and the upper east side, ate, explored a street festival in east village, went to church in the bronx, ate, took advantage of the grungy new york subway, breastfed in a taxi, and ate. now, some people have lists of things to do before they die; i have lists of places i want to eat at before i die. if you're not a fellow foodie, you can stop reading.
if you're ever in new york, please consider the following:
frank restaurant. www.frankrestaurant.com. homemade italian in east village. tiny little place with a lot of character, and the pasta is insanely fresh. i had some killer gnocchi, and we were serenaded by the sounds of a gospel choir practicing up the street. very cool.
sarita's macaroni and cheese, or s'mac. www.smacnyc.com. i have to thank the lovely lindsay southwick for the heads up on this one. personally, i think if you don't like macaroni and cheese, you should have to relinquish your american citizenship. and the dudes at s'mac take mac 'n' cheese to new and exciting levels. i had the garden lite nosh, but don't be fooled, there was nothin' lite about it, and i refuse to feel guilty. i love the breastfeeding caloric burn.
pinkberry. www.pinkberry.com. it's not unique to new york, but still a great place for a decent froyo. it's no senate froyo, for those who are in the know, but still worth a go-around.
rice to riches. www.ricetoriches.com. nothing but rice pudding. HELLO! probably my favorite part of the weekend. i stood there staring slack-jawed at all the wonderful flavors they had to offer. we ordered three kinds, just to be safe. in-credible. i highly reommend the cinnamon sling with raisins. but the best part? they ship overnight to anywhere in the united states. have mercy.
sarahbeth's. www.sarahbethscps.com. mother's day brunch on central park south. best apple cinnamon french toast i will probably ever had the pleasure to have met.
max brenner, chocolate by the bald man. www.maxbrenner.com. we went to the location near union square where they also serve real food, not just chocolate (although i oft times consider chocolate a meal in itself). the pulled pork crepe was really quite good, but i don't have a dessert recommendation. they serve chocolate everything: beverages, cakes, ice creams, fondues, waffles, sundaes, you name it. how could you go wrong? i'll be back.
i love this city.

it wasn't easy to leave...you know that! AND joseph owes me big time;) It is the greatest city on earth, in my humble opinion...not that I have hit every city, but so far--it is tops! So glad you had a good time!

Thank you so much for the recommendations. Like you, I have a list of places I want to eat before I die...and I'm not shy about this love affair I have with food. I could care less about the attractions. I will jot these places down in my book and hope to make it back to NY sometime in the next year or so. I have to agree with you, NY is the best city in the world. That's an awesome Mother's Day gift.

(BTW, I'm a friend of Jaclyn and Hilary. I love your blog.)

i'm so glad you went to s'mac and that it was all we hoped it would be. i can't wait to go. i'm still bitter i didn't find out about it 'til i got back. i realized after our IM session that we didn't discuss your trip. guess we'll need to have another sesh soon. xox

hey, are you at a street fair? man we loved those! no cars for the day just useless, needless, stuff! glad you had fun let me know when you return and we will drive down and go to dinner. boston is not that far away...

oh my goodness. you got to go to max brenner and sara beths? awesome. now i want to go to the mac and cheese place. thanks for the tips. i too have places i want to eat before i die! ha. what an amazing mother's day.

jealous. i want to go back there. i've hardly spent one day in nyc, and it was not nearly enough. let's get planning our girls trip :)

Matt just got Jeremey in BIG trouble. haha, I have been BEGGING to go to NYC ever since I met Jer. He simply wouldn't take because he has been there a million times (he lived in Jersey). I think this blog my have been the edge I've needed!! I called him the second I read about your trip and I think I have a commitment out of him for our next trip!!!! SWEET! Thanks for that! I am going to write down everything you recommended.

Hey, how big is Fox? He looks like is has out grown Beckham!

i heart nyc! it is truly my soul sister city!

You Burtons fit in NYC swimmingly...that should be your next stop.

And that Mac and Cheese place is a must see for me the next time I am there.

And there is nothing like Senate Fro-yo (although our little cafeteria here at the Capitol is installing a yogurt machine....so Senate Fro-yo might live on for me!)

thanks for the food tips, can't wait for the next nyc visit to try some of them! and i just love fox's sweet hat. gah!

unfortunately our short people in charge only let us frequent the big macs in the city.
scotty was not a fan of 2 strollers, stinky subways and the 2 hour train ride. me, i could live there.......
i am going back one day and will take you up on all the food offerings!

I want to go to New York so bad. John and I went when we were first married and I fell in love with it. I am dying to go back. What an amazing Mothers Day. You are so lucky. -MiaLisa