A.  we're going to turkey and greece in a few weeks, and in preparation for our trip, we purchased a backpack/carrier off of craigslist for toting fox (yes, he's coming with us... the eight hour flight could be extremely ugly).  matt and i were flabbergasted when we went to the sellers' apartment, just blocks away, and discovered that the sellers were originally from istanbul.  i'll be jiggered.  only in new york.
B.  my upstairs neighbor has a new girlfriend.  she's very... vocal.
i'm certain i just offended somebody with that comment.
C.  on st. patrick's day, fox and i took a ride on the subway (a daily occurrence).  as soon as we rolled onto the train car, a black woman sitting across from us shouted in disbelief, "it's st. patrick's day, and he can't take his eyes off ME!"  she repeated this several times, and it was nearly loud enough for the passengers in the next car to hear.  i assumed, since she was looking right at fox, that she was talking about my son staring at her.  i didn't get it though.  yes, lady, if you shout bizarre things on a subway car, my baby will most likely gawk at you.  but why is it so unbelievable that he's looking at you?  and what does st. patrick's day have to do with it?  oh wait, is it because you're black instead of leprechaun?
pretty sure that was potentially offensive, too.
D.  my evolving list of BEST CUPCAKE JOINTS EVER, AMEN:
5. buttercup; new york, ny
4. eleni's; new york, ny
3. tribeca treats; new york, ny
2. two little red hens; new york, ny
1. sprinkles; dallas, tx (lemon coconut cupcake: you are still the champion of my heart)
yep, i've been doing my fair share of eating.  it's a good thing i walk everywhere and haul my heavyweight son in his stroller up and down 93 stairs a day.  cupcakes not yet sampled: magnolia bakery, crumbs bakery... what else should be on this list, blogging world?
E.  fox, the budding democrat, with his new favorite pal, finger puppet barack.  these kind of shenanigans may get us booted out of the will(s): 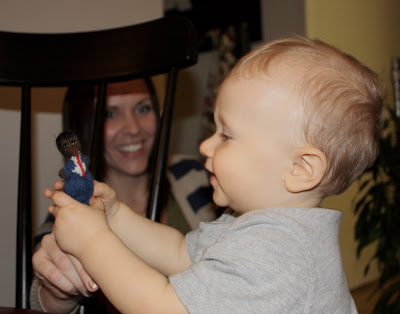 thanks for the pic, kathryn.

I'm drumming a reason to host a cupcake party just so I have a reason to order three dozen mini-cupcakes from my Brooklyn discovery. They might melt your heart, and the Peanut Butter + Banana + Honey might just knock this sprinkles nonsense out of the running. I'm just saying.

I had not heard your (B) story. Ew. Earplugs?? Mean anonymous note?

b) i have resorted to pounding on the walls before. it made brad unhappy, so i had to stop.

im so glad you said something in the elevator! way to go.

and i like crumbs, regardless of what others say. not so much their cupcakes...but their black and white cookie is soo good.

ps. i was in no way offended by this post. it made me smile.

I'd put The Cupcakery here in STL up against your NYC wanna-bes any day!

all i can say - I WANT TO GO TO THERE real bad! forrest got wait-listed at le comlubia. let us pray that our dean friend will open his heart to us and we can be neighbors! i won't be vocal and i'll help you throw down in the subway.

hahaha! i always get so excited when i see you have a new post. it's like christmas. just kidding. kinda...

I think B is hilarious! The comments I have swirling in my head however may be far to offensive for public use.

You are freaking hilarious-I think I laughed through that entire post,no offence here(I am also a white devirginised girl but whatever).

um, that is exactly the kind of information i was looking for as our conversation was coming to a close the other night. maybe "any other stories?" or "any other news?" wasn't clear enough ... but i'm pretty sure if I were heading to greece, turkey or even bozeman montana it would have made the list of "things to talk about." what brought this on? when? why? can i come?

Ok....it's official. Fox is more cultured then I'll ever be. I'm jealous. Oh & you are one smashing hot mom.

turkey and greece?!?!? while bringing baby. i admire your adventurous spirit. you need a new camera for this one, girlfriend.

eating? i don't hang with non-eaters. hunger is meant to be satiated in delectable ways.

so what kind of stories are you telling with your barack finger puppet? do share.

Do go to Billy's Bakery and Bubby's Pie Co.

I heart reading all of your stories.

I am so jealous of the bakeries you have tried outside 'the bubble'. **sigh** One day. So far my only experience is the Sprinkles mix from Williams and Sonoma. However, Sweet Tooth Fairy is a recent find here that I have enjoyed. All others here are just bleh.