write what you know

when i don't do this blog stuff for a while, apathy starts creeping in.  but i feel like i need to write... the thought reservoir in my brain is about to break and send the little dutch boy with his finger in the dam into the next life.  so here's what i know:
1.  i know that i love not being sick.  last month i was sicker than i've been since high school -- flat on my back, dizzy, vomiting, fevering, uncontrollable hacking, swine flu sick.  the doctor said it wasn't the swine flu. what does he know.  that wasn't a question.  i lived, in case you were wondering.  in reality it probably wasn't so bad, but matt was out of town when it struck, and i would have poked my eyes out with a spoon had the little boy taken ill.  mercy shone down on us that week... fox miraculously eluded infection, and he decided that he likes the taste of hand sanitizer (read: alcohol).
2.  i know that i sort of love orange county.  the smell of blossoms wafts through the air, the beach is close, people drive cars to super target, there is a super target, and the local trader joe's is EMPTY (next time i go to the union square trader joe's here in nyc, i'm taking a picture of the crowded aisles -- navigating that joint with a stroller is like trying to push a coffin through the general admission section of a stones concert).  we had to travel to the county of orange for a family wedding, and whilst there, the thought of returning to new york city kind of made my stomach hurt, which leads me to the next thing i know: i know that i can't live in a big city long-term.  i think part of me would die a little, and i'm certain i would die young from black lung.  but for now, i love new york.  our time here will be over much too soon.
i know fox really loved orange county, too: 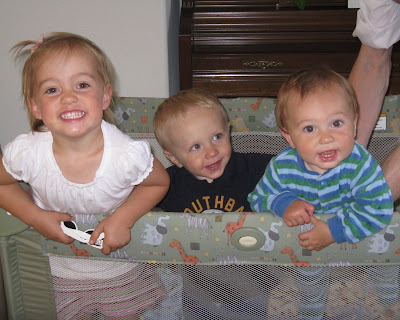 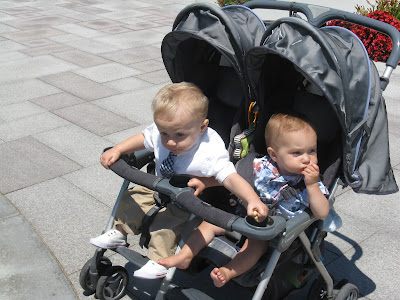 fox stealing his cousin's snack.
3.  i know i have good friends.  everywhere.
4.  i know that i won't be reading lauren conrad's fiction novel about a girl whose life is plastered all over a reality television show.  oh lauren.  i kind of thought you were smart for a second.  quit while you're ahead.
5.  i know there is an erin burton in british columbia who isn't getting some of her emails.  i'm trying to set things straight, erin; i really am.  some of the senders are repeat offenders, even after i give them the heads up about the wrong address.  i'm starting to wonder if the canadian erin burton gives out my email as a bogus email, like a fake phone number.  do you think i want to deal with the poor schmucks you're trying to fade-out, girlfriend? not cool, erin.  not cool.  there's also another erin burton floating around out there with relatives living somewhere in the dirty south.  i sometimes get family email updates intended for said erin asking me to pray for a sick brother and for an uncle who knocked over a drug store.  i kind of like those emails.

I'm so glad you're back! I needed a laugh and you delivered!

I didn't really like that one paragraph about you not wanting to live in New York forever & ever (with your FAMILY [!!!], albeit 2nd cousins).

You have not posted in awhile. I'm not going to lie- I have been suspicious that you have not posted since perhaps you are pregnant and sick from you first trimester. This clears things up - you've just been gone.

Yeah, I know what you are saying about living in NYC. You don't want to leave but you also just don't want to stay (space, super target, clean, etc). So conflicting. Nate and I are trying to decide where to put out desired locations on his application should be and are so torn whether to include nyc.

thanks for letting us know - i will also pray for the uncle that knocked over a drugstore. always love your witty posts

I know that I LOVE orange county and I LOVE Trader Joes. I go to LA for work a few times a year and I can wander that store FOREVER. They have them on every corner.

glad to have you back, sister. that makes two of us. i missed your witty banter all too much and i'm glad you are feeling better. cute photos of foxy! let's go to orange county together. please!

i can't agree with you more about living in nyc long term. im just not cut out for it. but im glad you are back in town, and that you are feeling better. lets hang.

YAY, you're back. I was having Erin withdrawals and have decided you need to come back to this big city. Now. Please. I would have taken your little boy for you while you were sick. I am glad you didn't have to poke your eyes out. That would have been a sad day. And that little boy of yours... huge. Love him. Miss him. Miss you. Glad you're better and good luck with the email thing.

i'm so glad you haven't broken up with us, your blog readers, yet. we need you, blogfriend, lover. you make us laugh and feel warm and fuzzy inside : ) and you make us see things differently; don't go. un-apathify yourself!! fall back in love!

we were actually in ny this weekend, and i thought of you often, but it was too much of a blur. we were actually in manhattan dropping B off at my sister's while we headed to the US Open on Long Island. after a couple nights, we came back and stayed a night with her in her teeny tiny place, which i absolutely ADORE!!!!!!! but as it was tiny and only shrinking more when B had her meltdowns, i thought of you... and me.... and all the citymothers of the world... trying to survive. trying not to die a little : ) i love the city, and it makes me sad to have to curse it every once in a while (when grocery shopping, ka-dunking my stroller up and down brownstone steps and narrow staircases, when it's pouring rain and doing any simple errands with subways and a baby seems to fall off the priority list, etc etc...)

don't stay away too long. you will turn us into blogstalkers, checking back repeatedly and too often to check and see if you wrote : )

Love the picture of Fox! I'm glad you're feeling better, I definitely missed your blog-self and cunning wit!

1. i didn't even know you were sick.
2. i want to raise chickens at least once. not easy round these parts
3. some friend i am if i didn't know you were sick
4. never heard of her. i'll click on the link
5. what do you say about this. someone has my ss card...i wonder if you two look a like?!

i'm glad you are feeling better! love the pics of fox, especially the snack stealing one. he's operating in full stealth mode...head and eyes straight forward, determination, and the look of utter boredom stretched across his face...the cousin didn't see him coming. EXCELLENT!

Oh Orange County. I will forever call it my home. For a second I thought you were referring to the OC in NYC. So I'm glad it's the CA one. When we are older and more established let's have a condo there & go once a month. I'm glad the Swine Flu didn't kill you. I don't know what we would have done! I have friends in Canada...let's go find that Erin. I want that picture of Fox on my shelf. It's dynamite.

erin skeen {enter married last name} (b/c you will always be erin skeen to me)= funniest blogger i follow! showtime should buy your blog!

i think i love my sis's long-winded comments the best.

erin. i miss you when you're not in cyberspace. we connect here. i take it personally when you leave me for long periods of time. come back. come back and be with the one-dimensional people.

i love you Erin :P your humor gets me every time :P LOVE the pic of Fox's hot lil' hands stealing the grub :P haha hope NYC is treating ya okay despite your love affair with the OC :)