okay, fine. you wanna get cute with your little tricks? don't think i won't go there, cos i'll go there, and i'll build a house there. 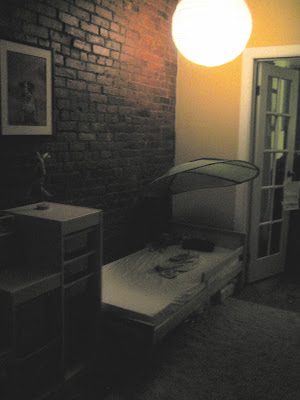 crummy picture, but you get the gist
last week we said goodbye to the padded-cell, more affectionately known as the pack-n-play, and it has taken temporary refuge in the closet until baby sister arrives early next year. in its place now proudly stands a toddler bed.  honestly, i didn't think we'd be crossing this bridge only 18 months into fox's short life, but fox is 95th percentile in height and 70th in weight (i.e. he looks like a four year old), so i guess physically he should have been bailing over the sides of his "crib" months ago.
so how do you explain to a baby that he now has to stay lying down on a mattress all night long and not wander around his bedroom and climb things he shouldn't? mercy, i wish i knew. as i was tucking him in that first night, i was doing my best to help him understand what in the world we were doing to him. i'm sure my "big boy" pep-talk laced with tears didn't inspire much confidence in the lad. i was flooded with guilt, worrying that we were making him grow up too soon and selfishly mourning the impending loss of the precious only-child time i have left with my sweet boy.  he knew i was in a bad way and comforted me with hugs, which then set off my snort-sobs. and that is how fox officially entered toddlerdom.
over the past few days there has been much weeping and wailing and gnashing of teeth, and i'm sure this is a 'two steps forward one step back' sort of process, but tonight he went to bed and stayed there, no tears.  extreme, most righteous internet high fives.  if i weren't so sleep deprived, i'd be dancing in the streets. 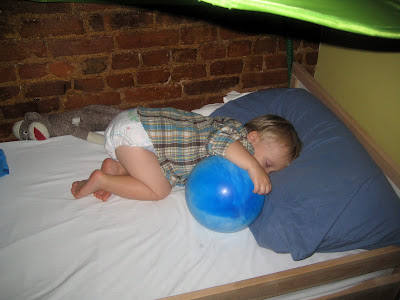 cute cute. and so weird that he is sleeping in a big boy bed. i'm so happy for you that you didn't have to fight him to make him stay in his bed. um, but what is the weird umbrella thing over it? we need to skype so i can get a better view of it.

it's an oversized leaf... it's from ikea. i thought it would up the cool factor and staying power. fox digs.

good job fox! he really is a big boy, the crib was so 2 months ago. this kid was ready to move on. i'm glad he is getting the hang of his new pad.

the leaf thing is a great idea - and obviously it worked. way to even the score! and I love that he's sleeping with a ball

huge internet high fives to you e! your little baby is turning into a little man, and its so wonderful he has an awesome mom to adore him. that sleeping picture is too cute.

so linds said she was there for his first 'get out of the crib encounter' and it was a chore! believe me, i TOTALLY understand. my oldest was a complete nightmare once we tried to get him into a big bed...and he was roughly the same age. the fact that you are just a few nights into it and he stayed in bed AND there were no tears from him or you speaks volumes. major props to your mom-hood. just had to peep on your blog since linds told me about this!!! (and the 'sex' sightings - which i must admit, i watch the edited series on TBS. so think less of me. that's fine!)

We put Coop in a twin bed when he was 15 months old. I had to sleep with him everynight for about a year. So atleast you don't have to squeeze in the toddler bed with him!

love that fox is sleeping with his ball. too cute.

Oh man! I love reading your blog! I love your descriptions and self-depreciating humor. You're such a great mother, as evidenced by Fox's awesomeness. Yes, awesomeness.

I can't believe your days of single child parenting are coming to an end! How fun and how scary! He'll be the best big brother!

we too used ikea leaf power for two toddlers telling them the power and protection the leaf offers them. it worked for 2 years for us, i love it......

love the leaf, you're doing great. I'm so not looking forward to doing that again. there's one small reward for Maggie's shrimpy-ness.

What a sweet little guy. So cute too.