when i pulled into my sister's driveway on friday evening, the first thing i noticed was the funnel web in the middle of her front yard. this was sort of a problem for me, but i suppressed the need to google until the following afternoon. but of course, of course, the first link that google coughed up was a month-old local news story about how some local yokel may have found an australian funnel web spider, one of the deadliest spiders known to man, in his driveway. normal, harmless, apple-pie eatin' american spiders make funnel webs too, right? someone respond to this immediately.
and last week my sister had to pop a tick off of her daughter. arkansas is the living jungle. i probably should have taken anti-malarial drugs.
love ya, hil! let's go to nordstrom. in dallas. 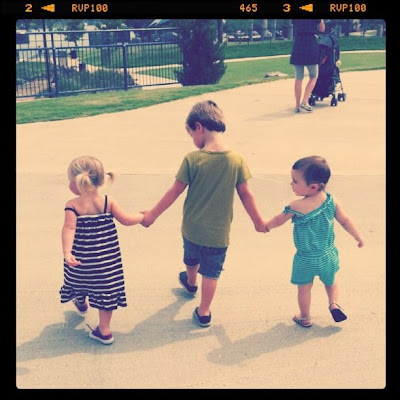 fox has his hands full keeping an eye these gorgeous babes. their outfits are killing me. why do my kids always look like orphans?!?

Any other blows you wanna throw on Arkansas? You forgot the rodent innards & near death tornado experience from your last visit. Sheesh. It's ok, I won't argue that it is a freaking jungle here. You already know I'm half terrified to set foot outside now - post tick nightmare - & we all know their shopping doesn't compare to the big D, but despite all of it's creatures & quirks, it's not that bad of a place to live! It was a beautiful 77 degrees on labor day for you & my running weather was in the 60's today - just beautiful & perfect.

Ahh, memories of tick country. Missouri was where Matthew met his. On a lighter note, there are funnel webs all over my yard here. Nothing too scary ever comes out. Makes me glad I'm not an Aussie though!