a day of my life in the town where i live. 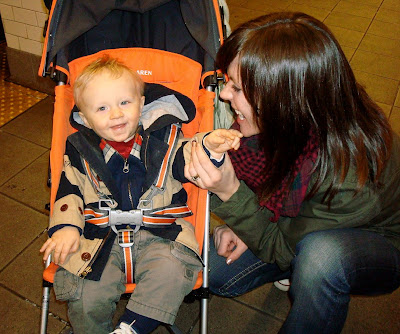 fox and i went to a j. crew sample sale today; it's something we do on occasion.  i've decided fox is no longer invited to come to sample sales.  you see, you must check your stroller (aka restraining device) at the door, which leaves me to tote master fox on my hip, which is becoming increasingly more difficult now that he's quite steady on his feet and eager to get into trouble.  so while shopping, to take fox's mind off the fact that he was being held in my arms in a room full of bright and beautiful things to grab, i handed him a hanger to play with, which ten seconds later he jabbed in my eye.  next i tried letting him ride on my shoulders, but he quickly realized he was no longer in reach of the fine textiles and angrily started to throw himself off his perch.  things quickly deteriorated from there, and he was back in the stroller rolling out the door before his seat had a chance to cool off.
and on the way home, at 37th and 7th to be precise, i spotted a food cart named "meal o'bama." (hmm, i didn't know barack was irish...?)  i didn't get a good look at the cart, so i can't tell you if sasha chicken nuggies or biden burgers were on the menu.  new york city is obsessed with obama paraphernalia, almost as much as dallas was (is?).  the day after the election, at my local wal-mart in irving, i remember seeing two women proudly sporting black, gold and bejeweled barack t-shirts.  obama is the new black.  no pun intended.
completely unrelated topic: i'm not much of an american idol fan, but i've decided i probably should watch it religiously if i want to thoroughly enjoy my new favorite thing on the internet, idolatry.  if you're even the slightest bit salty and only watch american idol commercials, i suggest you go here.

I still need to know if your sight is in tact. Was it one of those cheap metal hangers? Fox wasn't messing around.

Remember the first time we went to a JCrew sample sale, oh so many months ago? I think I held Fox a good amount of the time, right? I think he's doubled in size/energy/walking ability. Yikes.

way to brave the sample sale with foxy. i mean..can you blame the kid? he was just so excited about the crewcut samples. he couldn't contain himself. i would have been surprised if you didn't get gouged in the eye with a hanger by him, or some other jcrew maniac.

i've seen little stuffed animal backpacks for kids that have a tether on them. . .it's a little creepy, but i'm still tempted to try one. i can't tell you how much i appreciate the joys of shopping sans kids when i get the chance.

your hair is looking so long and luscious!

Thanks Erin, little Fox sure is handsome. :)

Nice post hon. Glad to hear that the boy has the same aversion to sample sales and shopping in general that his father does... Love you lots. M.

man where have I been? Im loving the idolatry...

sigh... shopping just isn't as fun with little people around, is it...

Oh, try living in the Avenues or Sugarhouse in one of the bluest cities inside one of, if not THE reddest states! People STILL have "Obama for President" signs in their yards. Ok. We get it. You are different in Utah. Got it.

ooo... shopping sans kids is a must. if by some freak of nature chance they do end up with me, it always ends in tears. always.

and obama is the new black? hilarious.

i meant to send you this link after i read this post. from my friend tracy's blog: