i'm not sure why you are still reading this blog.

so i live in a dallas suburb now. i am married. i have two kids. and a dog. we rent a nice townhome. drive two cars. my husband has a decent job. i stay at home. we are generally happy. aside from the fact that my kids have weird names, we're about as cliche as a middle-aged bald guy driving a mazda miata.
and now i'm going to post a picture of my dining room, because that's what we (mommy bloggers?) do. we post pictures of things we do/create. maybe it's because subconsciously i need validation. maybe it's because i need to legitimize how i spend my time. this is getting too deep for a (mommy?) blog: 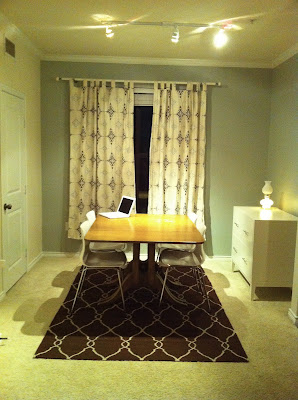 it needs art, and i have just the thing. matt brought home some mid-century soviet social propaganda and space race posters as a concessionary act after his recent shenanigans in central asia, and i heart the posters very, very much. he knows me. and i think that if some of my new ultra-conservative neighbors saw the posters they would think i'm a socialist. i'm not. i just think the reds had some good design ideas.
things fox has said that are funny:
"mom, i told my teacher that abc's was your favorite song."
"arkansas lives in the united states!"
and i love that when he sings he's generally a half a second behind everyone else. i hope he hangs onto that when he's of "primary program" age.
oh, here's another picture... "my dad went to tajikistan and all i got was some totally righteous traditional garb:" 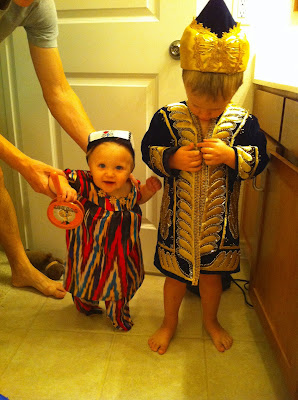 jerks. i'm going to post a picture of our living room/kitchen/bedroom/dining room. everyone will be so jealous.

nice work, erin. it looks very clean and fresh. i like it. and the wall color? good choice.

I dig the rug. And the garb is very cool!

i'm all about propaganda posters.

love the modern vintage room. You rocked it.

you are such a great writer erin. you really may be one of the most clever women I know. that's why people read your blog. however, I do usually wish I was you after reading it (except I don't want to clean up fox's poop).

Are you walls grey? They look like my grey! I love grey.

The chairs make my heart flutter.

As does your rug.

All of it is just awesome. There you go. Validated. From someone whose opinion is clearly SO important (& superior to any other, right?).

i really dig the curtains! it all looks lovely. good job homemaker. i use that word with all the pride/respect/cliche-ity of a fellow homemaker.

you're living the dream, erin. you and your socialist wall art and your children in their traditional tajikistan (am i even spelling that right?) garb. love your dining room. love your kids. love you. i would probably love gunther if we'd had more time together. i'll keep reading this blog until you delete it from cyberspace forever (please don't ever). feel validated.

consider yourself validated. it's beautiful. and so are your kids in their garb. awesome! i kind of hate you, though. i have no children and won't for some bloody time. my husband has a shitty job. we rent a not-nice too-small apartment where two, yes two murders have occurred within the past 6 months. also, i carry pepper spray to the "gymn" on the facility where only one broken elliptical machine exists, and sometimes I call my husband to come and walk me home so I don't get added to the murder list. i have a dog, though.

I love it Erin, I'm glad you are obliging for the masses. I really love the chair/table combo.

i think it looks totally awesome. beat that erinspice.

have you met my sister yet? She has 2 kids and lives in a townhome in a suburb of dallas too. I mean, it seems only natural you would meet.

Just embrace it. There's really nothing else you can do.

your place looks fab-ulous! your kids should have worn those costumes for halloween1 i lub em!

Hi cute Erin...would you be willing to spill the beans and fill me in on where you got your drapes. I'm in LOVE with them.